This article covers some basic and advanced time-lapse techniques, with various tips and tricks. These methods were used for the timelapses in the Blue Eden project.

Nikon's built-in intervalometer, and extra accessory for some Canons

Tripod and lens.
You'll also want a tripod and a wide-angle lens. Ideally, lenses 24mm or wider on full-frame camera bodies are good for landscape, as well as for rotational panning with Panolapse. Since the final video is relatively low-resolution (1920x1080HD or 1280x720), you can usually crop a scene in later if you need to change framing.

As you become more advanced, you could consider replacing the tripod with a motion-controlled slider or motion-controlled head - these machines usually cost a minimum of $1000 and are pretty complicated to set up since you'll want move-stop-move capability, in which the system stops while photographing to ensure no movement blur. Getting the motion just right is a whole other issue, as well as transporting the sliding tracks, motors, batteries, etc.,

Panolapse is a software workaround that acts like a motorized head. Panolapse can be combined with motorized systems as well to allow more artistic direction. Ultimately, motion in timelapses is going to be restrictive, and the more movement options that you can add, the more creative flexibility you'll have.

Getting the exposure right for the "Holy Grail."
A timelapse shot during sunrise or sunset ("golden hour") with changing exposures is known as the "Holy Grail timelapse," since it can be difficult to do right. Some people might recommend shooting in Aperture priortity "auto mode," but the camera's auto-metering is unpredictable and you could lose the whole shot.

Another technique is "bulb ramping," in which an external remote accessory interpolates your camera's shutter speeds. Firmware upgrades like MagicLantern for Canon can do this as well. The issue with bulb ramping is that you need to time the start/end exposures exactly for it to work.

RAWBlend (with AutoExposure) automates "Holy Grail" shots. Shoot in Manual mode and adjust the exposure every 10 minutes or so as the light changes. Later, create a gradual blend by interpolating the exposure across the frames. AutoExposure analyzes file metadata for changes in camera settings, and can interpolate frames with near-perfect exposures for smooth blending.

Some cameras have a "light meter" on the LCD screens that indicate how under/over-exposed a scene is - that's a good one to check for when it's time to adjust exposure. RAW can usually save an image by up to 2 stops of light. 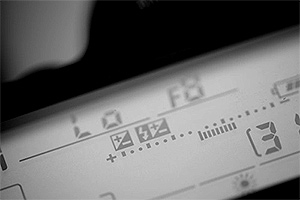 Light meter shows under/over exposure (Nikon). This is under exposed by 1.3 stops.

Setting shutter speed.
The shutter speed time matters if you want motion that flows together. Generally, you'll want to target about half your interval time. The reason for this is that the traditional "film look" is shot at 24fps with a 1/50s shutter speed (which is about a 2x factor). At this ratio, moving objects will appear blurred and blend from one frame to the next. To maintain this look, if you're shooting at say 5 second intervals, you'll ideally want a 2.5 second exposure time. In such scenarios, a polarizer or ND filter could be useful to avoid over-exposing a scene. However, if your scene doesn't have much movement (such as rolling clouds), then this isn't much of an issue.

Consider your interval time between shots.
A 1 second interval betwen each shot played back at 24fps is like fast-forwarding real life action by 24x, so it's already quite quick. I usually go with about 5s interval for clouds and general scenes. I'd use about 2s for fast-moving fog, and 10s for stars. Be careful not to drop frames as well. For example, a 5s exposure with 5s interval between frames means continuous shooting - that may be too much data for your camera to handle and it will lose every other frame.

Keep your shutter time less than your interval time, or you'll drop frames.
Target about half the interval time.

Calculate your total shooting time.
One rule of thumb is that I'll double my interval time to get 5s worth of footage. If I'm shooting 6 second exposures, then I'll plan to shoot for a total of 12 minutes. This rule of thumb provides 5 seconds of footage at 24fps output framerate. The math works out like this so you can tune it for your own settings:

Don't forget to set manual focus.
If you forget, your camera will refocus every frame and you could lose the whole sequence. Disable Auto-ISO if you're shooting Manual.
2. Process images
You can batch-process a set of RAW files (or JPGs) in Adobe Lightroom or Photoshop. Process the images for color and exposure. If applicable, correct for lens distortions and remove vignetting. For best quality, export JPGs at full resolution. Do not crop at this stage. You might consider disabling sharpening as well, as this is best done at the end after downscaling to the final video size (1080p or 720p).

Interpolating exposure.
If you changed exposure settings during the timelapse such as for a sunrise/sunset shot, you will need to interpolate the exposure over the frames to blend them. RAWBlend can do this quickly - process the start and end keyframes, and with auto-exposure enabled, you're done in one click. Alternatively, you can also manually go through the frames and tune the exposures. Almost always, you'll want to apply a deflicker filter (explained later) at the end to smoothen out the brightness of the scene.
3. Add motion with Panolapse
Motion can add dynamism and artistic direction to a still timelape. Import the JPG files into Panolapse to add natural rotational panning motion. Add zooming and deflicker if you like. Export at the maximum optimal resolution.
Add dynamism to a shot with motion
4. Composite the frames
Panolapse can export your JPG frames as a video. Timelapse videos are often compressed twice, as they are often clips used in longer videos, so use maximum quality. Intermediate codecs such as PhotoJpeg, Cineform, or Apple ProRes are ideal. Panolapse provides output with the PhotoJPEG and x264 codecs, both at high quality (considered visually lossless). Intermediate codecs are large in filesize, but preserve quality and allow quick decoding for editing.

Deflicker.
Timelapses can appear to flicker in brightness as well. This is often caused by the camera settings differing by just a little each time a photo is taken, even when shooting on manual mode. Panolapse has an export setting to deflicker using a moving-average of the scene brightness.
5. Final Video
When you have a few video sequences ready, you can combine them into a longer video for upload to Youtube/Vimeo to share. In the final render, use an output codec like mp4/h.264 that balances file size with quality. 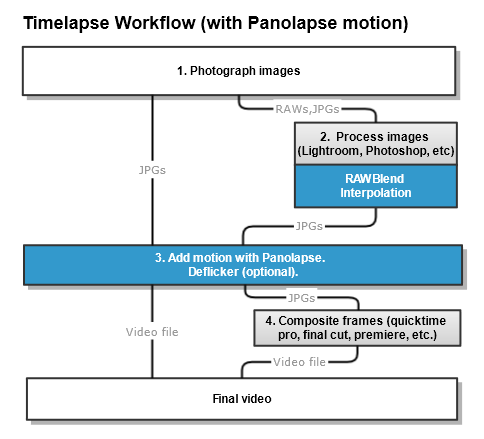 Any questions? Email contact@panolapse360.com. And don't forget to show me what you made!